The other main attractions of Zomercarnaval – the Battle of the Drums, the music concerts and the street food vendors run from Friday night to Saturday night. The crowning of the carnival Queen is always held one week prior to the parade.

Prior to traveling please check if there are any travel restrictions or if the event is still on, as cancellations may occur due to the ongoing Covid-19 pandemic.

The Zomercarnaval Parade, street vendors and concerts are all concentrated in Rotterdam’s city centre. They are stretched out over an area of around five kilometres.

Just outside the central area of Rotterdam life is normal so if you want to take a break just escape the city for a few hours!

Zomercarnaval is a summer carnival that is all about diversity of cultures, music, dance, art and poetry. Rotterdam summer carnival features a huge street parade, drum battle and music concert.

Rotterdam is a fusion of many different cultures and their traditions which transform Rotterdam each year.  Over one million attend Zomercarnaval to dance, party, enjoy the parade, eat some exotic food and be joyous.

Ask anyone from the Netherlands where is the best party? The answer they will give you is that you will find the best party in the world in Rotterdam at their annual Summer Carnival, Zomercarnaval!

Zomercarnaval is an exuberant and lively of summer carnival that occurs in the city centre of Rotterdam, the Netherlands’ second largest city each year. Zomercarnaval attracts over one million people from all over Holland and beyond.

Most people wouldn’t expect this when it comes to Rotterdam. But it is true this port city hosts one of Europe’s biggest carnivals which has been a secret for way to long.

Zomercarnaval began back in 1984 when a bunch of students from the previous Dutch Colonies, Curaçao and Aruban wanted to carnival like they did when they were back home in the Caribbean Islands.

So the first Zomercarnaval was held back in August of 1984. It was created to allow the residents of Rotterdam to experience how carnival is celebrated in warmer carnivals. The West Indies were originally the main inspiration on how the carnival was celebrated.

Zomercarnaval popularity continued to increase year after year and in two decades Zomercarnaval grew from a small Caribbean party into a giant three-day carnival celebration attended by over a million people, that celebrated cultures from all over the world.

Rotterdam is a culturally diverse city, a melting pot city of 178 different nationalities. The more Zomercarnaval grew, the more that the character of the city, came to be represented. People from different backgrounds saw carnival as a chance to showcase their individual cultures.

Zomercarnaval gives their local citizens to proudly showcase their different cultures. Which is done through their music, dance, costumes, art and floats. All these different cultures fuse together to create an incredible extravaganza. Every culture has added some new element or tradition.

ZomerCarnaval is often compared to Notting Hill Carnival as they are both large all day street parties. However the key difference is that while both started out as Caribbean Carnivals, Notting Hill’s stayed loyal to its roots and Zomercarnaval on the other hand evolved to include more cultures and nationalities.

A week before Zomercarnaval the city selects a Rotterdam Carnival Queen. People can vote online for their favourite candidate. The Carnival Queen is chosen from the carnival groups and the key requirement is that she can dance well.

The Zomercarnaval Queen is the ambassador for the Rotterdam Summer Carnival and leads the parade in a float.

Another highlight of Zomercarnaval is the Battle of Drums which occurs on Friday evening and sees the three best Dutch brass bands start playing from three different places in the city and then come together creating a spectacular show.

It is a very loud and rhythmic drumming show that can be heard everywhere in Rotterdam. The bands are competing for the title of Best Brass Band. The Battle is a great way to get in the mood for the following day of partying and parades.

The Zomercarnaval Street Parade is the biggest party day an occurs on the Saturday day when a huge colourful carnival procession of brass bands and thousands of amazingly dressed dancers and performers hit the streets of Rotterdam.

30 giant decorated floats with large Soundsystem’s pumping out the music, along with drums and the brass bands music fill the air with music, creating a Latin/Caribbean atmosphere right here in Rotterdam.

The streets of Rotterdam transform into a tropical paradise for one day! Zomercarnaval is one massive street party that everyone is invited to the party!

One of the biggest highlights of Zomercarnaval is the delicious street food vendors that line the streets. Smells of delicious exotic foods fill the air. You are spoilt for choices there are vendors selling foods from all over the world.

Maybe you want to try some delicious Caribbean food like jerk chicken or beans and rice. Or maybe you would prefer some Japanese sushi. There is food from Asia to Africa. There is also plenty of exotic cocktails, beers and free flowing rum.

The street markets also sell gorgeous arts, crafts, jewellery, clothing and more. So many unique and beautiful items on offer from all around the world.

The concerts feature music, dance and comedy shows. There are even poetry readings held. The music featured at Zomercarnaval is varied from Caribbean soca tunes, to hip-hop, R&B, jungle, pop, live electronics. Whatever your musical taste you will find something that caters for you.

What to wear to Zomercarnaval?

Zomercarnaval is one of Holland’s most legendary events. A celebration of cultures from all around the world.  The parades are colourful AF, with women dressed in colourful and elaborate feather headdresses and bejewelled bras. You don’t need to dress like the people in the parade but why not wear some playful pieces that will help you stand out from the crowds. Its the time to let your imagination one wild and get creative and wear something fun, you can check out some cool outfit ideas on Amazon. Remember though to wear comfortable shoes as you will be on your feet all day long!

How much does it cost to attend Zomercarnaval?

Book your Hotel and Flight for the Zomercarnaval

There are plenty of accommodation options in Rotterdam that cater for every budget. From hotels, hostels, B&Bs to apartment rentals there is something for everyone. Obviously if you want to be close to the action it is best to choose an area in the city centre so you can walk to everything.

It is important to remember that because hundreds of thousands descend upon Rotterdam for the weekend you must book your accommodation as far in advance as possible.

Rotterdam is considered a very safe city and the atmosphere of Zomercarnaval is always very friendly and positive. As with any big city take normal pre-cautions after dark. It is probably best to leave your valuable back in the hotel as some pickpocketing may occur

How to get to Zomercarnaval?

Its easy to fly to Rotterdam which has a well-connected international airport. The flight is less then an hour from London. You can also go via train, bus or drive as the city is well connected to the rest of Holland and Europe. To get a quote for a flight click here.

The streets of Rotterdam are brought to life with tropical music, cheerful colours and exotic scents. This is a not to be missed carnival experience. This makes Zomercarnaval incredible unique, people are not sure what to expect.

For more information about tours, things to do, sightseeing tours, day trips and more click here. For a longer tours and vacations check some of the different itineraires on Tour Radar.

Rotterdam is a very safe place to visit but be aware of pickpockets during carnival when there are big crowds and it’s ease to get your stuff stolen. So be aware of your valuables at all times or even leave them back at your hotel and only bring some cash with you. Or check out Amazon and invest in one of these travel safety accessories, like a fanny pack hidden under your clothing to store your essentials in.

Northampton Carnival is a fun filled carnival celebration for the whole family! It is an incredible day where you can watch the amazing parade or watch some free concerts, go on some rides, eat delicious food from around the world and have fun with the community.

Houston Caribbean Festival will far exceed all expectations. Great music, food, costumes and vibes. It is a beautiful mix of different cultures, people and generations all enjoying each other and life. 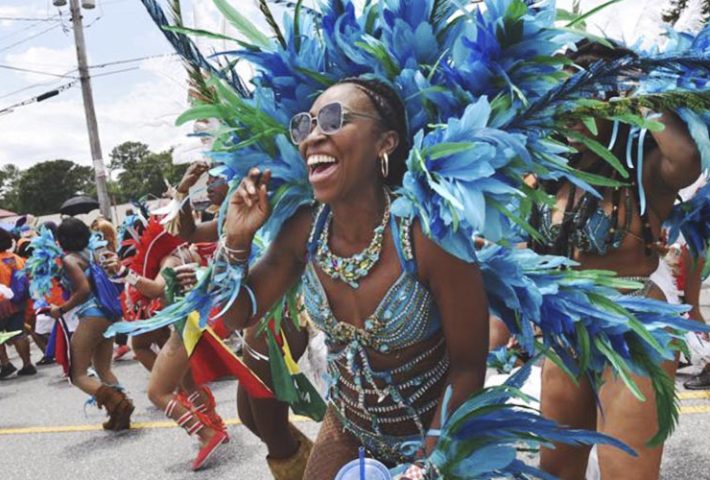 Atlanta Carnival is a Caribbean. American carnival celebration that is colorful, chaotic and filled with revelry. Here is everything you need to know about attending carnival in Atlanta!

Nice Carnival is one of the biggest, best and oldest carnivals in the world. For 12 days millions of people celebrate carnival in the French Riviera. Here is everything you need to know about attending canival in Nice!

Notting Hill Carnival is one of the most exciting & colorful events worldwide. For 2-days millions overtake west London for Europe’s biggest street party.