What is the history of Venice Carnival?

Venice Carnival supposedly began in 1162 as a celebration of Venice’s victory over Aquileia. However, it is speculated that it dates back as far as the 9th century. Find out how it all started!
Table of Contents
Add a header to begin generating the table of contents

No one knows exactly when the Venice Carnival first began. The first historical mention of Venice Carnival dates back to 1092, when it appeared in the order of Doge Faliero. Many scholars agree that Venice Carnival has its roots in Christian tradition and was a time when people were allowed to have fun, forget their worries and indulge in life’s pleasures before the solemn period of Christian Lent (a time of sacrifice and reflection for the 40 days prior to Easter).

However, Carnival’s origin is older than its Christian roots and extends back to pagan celebrations that used to celebrate the end of winter and the return of the fertile season of spring.  The Italian word “Carnevale” comes from the two Latin words “carne” meaning meat and “vale” meaning goodbye or farewell, signifying that people would fast and avoid temptation during lent.

Ancient Rome used to celebrate Saturnalia which was a time of complete break from social norms and hierarchical boundaries where citizens celebrated with dance, music, feasting, drinking and rowdy parties. Venice itself was founded by Romans escaping barbarians and was built on the remains of the crumbling Roman Empire. Later in history, the church rather than suppressing these pagan celebrations allowed them to continue, but gave them Christian meanings.

Venice Carnival was born from the need of the Republic, to give to the population and in particular its most modest members, a controlled period of time which was dedicated entirely to fun, parties and entertainment. This celebration which was already common in ancient Rome, was characterized by an abundance of balls and parties, where both the locals and visitors would meet, celebrate and mix, forgetting all about politics, business and life’s struggles.

Carnival is a time of excess and suspension of social norms and this is something that Venice Carnival would make itself very famous for!

It is believed that the tradition to celebrate Venice Carnival began or at least grew larger in 1162 with the defeat of Ulrich II of Treven who was the Patriarch of Aquileia (an ancient Roman city in Italy). He had unsuccessfully tried to bring Venice under German rule. He was taken prisoner along with his 12 vassals. Venice’s Doge reacted quickly and sent a fleet to Grado and he was surrounded and captured.

On demand of the Pope, who wanted to re-establish peace, the men were released on the condition that every year on Holy Thursday, the Patriarch was obliged to pay a tribute to Venice which included a bull, 12 pigs and 12 loaves of bread. The livestock would be slaughtered and shared with the population in Piazza San Marco in front of Venetians to commemorate the victory.

On this day many street celebrations would take place. Games, dancing and bonfires would take over the city streets. Fat Thursday, the last Thursday before Lent. became dedicated to the memory of that victory, and the celebration grew larger year after year.

However, Venice Carnival wasn’t officially declared a public festival until 1296, when the Senate of Serenissima made Shrove Tuesday a public holiday. From that moment and for the next few hundred years. Venice Carnival runs for six weeks, between December 26th and Ash Wednesday.

As Venice continued to gain prominence as a wealthy commercial and cultural center during the Middle Ages, the carnival with its easy-going and frivolous nature began to attract a lot of visitors from all corners of Europe and turned Venice into one of the world’s most visited tourists’ destinations of the time.

The main feature of the Venice Carnival has always been the stunning masquerade masks and costumes! The earliest documentation of masks being worn during carnival dates back to 1268, when the practice of masked men throwing eggs at ladies during carnival was outlawed.

During the Venice Carnival the streets of Venice were full of people wearing masks which allowed them to protect their identity and hide their social status.

Venice was a city with a rigid social system and wearing a mask and costume allowed anyone to be who they wanted to be whether it was a peasant mixing with aristocrats at masked balls, or a man dressing as a woman, or the famous womanizer Casanova, pretending to be a state official to seduce a married woman as he recounts in his raunchy biography.

Venice had one of the strictest social hierarchies in Europe during this period and the use of masks and costumes during carnival provided a much-needed peaceful outlet for the release of tension and hostile feelings of the lower classes. Activities like mocking the government or the aristocracy were not only allowed but also encouraged during this period.

Prominent Venetian citizens, visiting members of nobility or merchants and politicians also enjoyed wearing costumes and masks, for it gave them the chance to engage in frivolous behavior and socially or religiously inappropriate activities without fear of them being recognized.

As Venetian Carnival became more popular it also began to attract shady characters. Men could get dressed as women or as servants of faith, which allowed them to enter convents and act inappropriately. Casinos attracted masked gamblers, who sometimes would flee their creditors.

Men could easily conceal weapons under their costumes and cause mayhem on the streets of Venice. This led to several prohibitive decrees, including the ban on costumes and masks at night in 1339. In the 15th century another ban prohibited the entering of holy places while wearing masks, followed by later bans on concealing dangerous objects and weapons under Carnival costumes.

The height of Venice Carnival!

By the 18th century the Venice Carnival reached its maximum splendor. Venice was the pleasure playground of Europe and was known for living the good life. It was also the center of gambling, essentially the Las Vegas of its day.

It was a celebration that knew no bounds. Carnival had also gained international recognition and attracted visitors from all over Europe, between 20 and 30,000 by some estimates, among whom were monarchs and European noblemen.  They came to enjoy the pleasure, entertainment that the incognito of the mask afforded them.

Venetians unabashedly took part in lots of debauchery and revelry, with their identity and sins concealed behind their masks. There were lots of wild parties, illicit liaisons, gambling and bloody bullfights. During this period the carnival would last for six months! It was also during this period that the famous adventurer, artist and ‘womanizer’ Giacomo Casanova lived in Venice.

Carnival was banned for 200 years!

When Napoleon and his troops invaded Venice in 1797, it lost its independence and became part of the Austrian-held Kingdom of Lombardy-Venetia. This resulted in a long period of Venetian decline – economic, cultural, political and the end of carnival.

The French were shocked by what they witnessed at the celebrations and Napoleon prohibited the wearing of Venetian Carnival costumes, except during private parties and for the Ballo della Cavalchina in Teatro La Fenice. As a result, Carnival ceased to exist for nearly 200!

On January 18th, 1798 the Austrians took control of the whole city and the Carnival almost disappeared for nearly two centuries. In the 1930s Venice Carnival was banned by the fascist government.

Related: Everything you need to know about Venetian Masks!

Centuries later, the Venice Carnival remains Italy’s biggest event! Carnival was revived in 1979 by some locals. Today’s Venice Carnival is a much more family friendly event. The celebrations have a slight hint of hedonism but nothing on their forefathers. Most of the hedonism now takes place in the many private parties and masquerade balls that occur during carnival.

Venice Carnival today is like a historical re-enactment and recreates a time when the Venetian Republic held an elite place in the world and ruled the trade routes. Carnival still has lavish parties, stunning costumed revelers, famous venetian masks, venetian delicacies, entertainment, music and numerous spectacles that let you experience what it was like to be a Venetian of the past.

12 Things to Do and See at Venice Carnival

Venice Carnival is one of the most magical and spellbinding carnival celebrations! Here are our top suggestions of things to do during carnival.

The Best Things to See and Do in Venice

Considering this city has existed for centuries, there are enough things to see, do and explore for years. From gorgeous churches, palaces, shops, restaurants, artworks, to riding a gondola on the canal, your senses will be overloaded. Here are our top suggestions for things you absolutely must do! 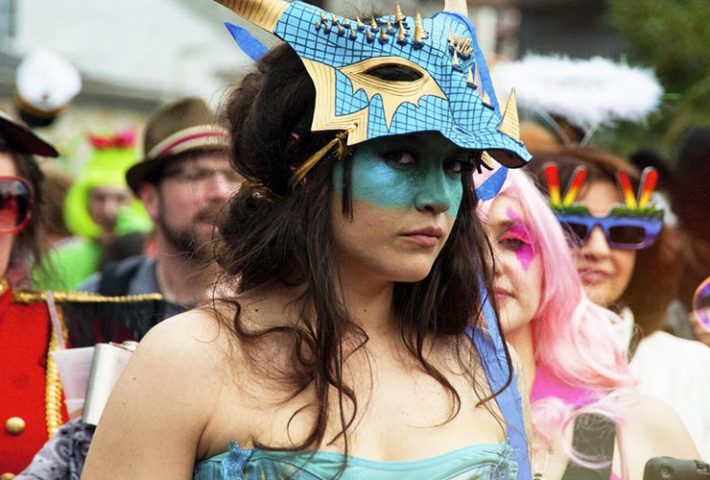 Top 10 Things to Do and See During Aalst Carnival

Aalst Carnival is a Belgium pre-Lenten carnival celebration that takes place in the city of Aalst. It is a wacky celebration, full of political satire that dates back to medieval times.