Samba music is the beating heart and soul of Rio Carnival and has been ever since it first appeared in the 1920s. Samba is central to all the traditions seen during Rio Carnival. Anywhere you go in Rio, during carnival you will quickly discover that it is impossible to escape the catchy sounds of samba music.

Samba music is famous for its rhythmic beats and catchy rhythms. It’s a contagious style of music that makes it impossible for the listener to resist standing still. Samba music and the Samba dance form evolved from the African slaves that brought their music, dance and rhythmic drumbeats from Africa.

Samba infiltrates all parts of Brazilian society, from the richest neighbourhoods in Rio to the poorest favelas. Samba is something that brings all Brazilians together, no not matter what your economic class is.

Rio de Janeiro is home to over 100 samba schools and they are the reason that Rio Carnival is so spectacular and unique. The Samba Schools are like football teams, each neighbourhood has a samba school representing their neighbourhood and they also have a loyal fan following. Each samba school has their own colours, flag and distinct costume styles.

These Samba schools are large social groups with around 3000 – 5000 members. The background and economic status of each of the schools varies widely. Some samba schools are at the forefront of the samba scene and take the parades very seriously. Each year all the samba schools compete because they want to move up to higher leagues or remain in the top league.

The top league is called the Special Group and is made up of the 14 best and most creative samba schools. The Special Group competes at the Sambadrome for the chance to be crowned the Best Samba School and receive cash prizes, nationwide fame and the adoration of the Brazilian people.

The Rio Samba parades are world famous and are known as the Greatest Show on Earth. They are the result of a years’ worth of hard work, dedication and passion! Visitors from all around the world fly to Rio to see the top 14 Samba Schools known as the Grupo Especial, or the Special Group.

They perform in the most extravagant 2-night spectacle, competing against each other from sunset to sunrise, in a performance so amazing it is broadcast to the world. The Grupo Especial Samba Parades are held on the Sunday and Monday of Rio Carnival.

The Grupo Especial features giant 20m floats, dazzling costumes and 60,000 performers. Each Samba School has roughly 5000 members who parade slowly down the 700m length of the Sambadrome, singing, dancing, and drumming their hearts non-stop for ninety minutes with perfect precision, with the goal of being crowned The Best Samba School of 2019.

Each samba school portrays a different theme that’s influenced by their own traditions. The costumes, floats, dances and music are all meant to reflect that theme. The Samba Parades at Rio Carnival often feature strong cultural or political messages often taking aim at government corruption.

The Sambadrome, or Sambadromo in Portuguese is a giant custom-built samba stadium, where the main carnival event occurs. The Sambódromo features a long 700m runway and can hold 90,000 spectators. Originally the Samba School Parades were held on the streets of Rio.

During carnival all roads lead to the Sambadrome it is the centre of all carnival celebrations, of course, the focus is on the beautiful samba dancers. Nothing comes close to the electric atmosphere that is felt inside the iconic Sambadrome during Rio carnival.

How to get to the Sambadrome?

The Sambadrome is located in downtown Rio and there are several ways you can reach it. From the Copacabana/Ipanema area, where most tourists stay you can take a subway and then a short walk. Public transport to the samba parades is always lively during carnival so it can be a lot of fun to join the hordes of people heading out.

If you aren’t staying near a subway or you don’t wish to take public transport, then you can easily take an official government taxi. Also, there are numerous private shuttle services offering transport between your hotel and the Sambadrome during carnival.

The new 2022 Rio Carnival Samba Parade Dates are as follows:

Which Rio samba schools to follow? The Samba Parades Special Group is a serious competition that only features the best and most creative Samba dancers, musicians, choreography, costumes and floats.

How the Samba Parades are judged

The Samba Competitions is like the English Football Premier league in that the number of points a samba school earns during the Sambadrome determines their place in next year’s competition. Those with the least points in the first division compete in the second division the following year. And those in the second division with the highest points get to move to the first division.

The samba schools are marked by a panel of 40 judges who keep a close eye on the samba schools during their ninety-minute performance. Points are awarded based on several criteria; lyrics, drumming cadence and precision, sensational costumes, overall harmony and allegorical theme.

The Samba Parade costumes are the result of millions of man hours and the costumes are colourful and revealing. They often feature feathers, mirror work, sequins, silk and numerous other creative materials. In addition to the amazing costumes there is a lot of glitter, makeup and body paint used to transform the costumes.

Some of the samba schools will have six or seven 20m high floats as part of their performance. The floats are giant, elaborately decorated machines that can perform amazing mechanical moves. Often the best dancers ride on top of the floats during the performance.

The results of the Special Groups Samba Parades are decided on Ash Wednesday. The following Saturday the top six teams will perform again at the Sambadrome where you have a chance to go and watch only the best performances.

There is no competition, so the schools are free from pressure and able to just enjoy themselves. The energy in the Sambadrome is still electric with celebrities, socialites and thousands coming out to watch one last samba parade.

The second division Samba Schools also perform at the Sambadrome during carnival. Their parades are just as creative and incredible to watch as the Special Group because their motivation is to advance to the Special Group the following year and it is one fierce fight. Tickets are a little cheaper to see this group.

The children also get the chance to perform at the Sambadrome in their own samba parade. The Children’s Samba Show is also spectacular and will give the adults a run for their money. There are many children who have committed themselves to this Brazilian tradition of samba and it ensures that Samba is a tradition that will be kept alive for several generations to come.

Tickets to the Rio Carnival parades at the Sambadrome can be purchased online, or in person at the Sambadrome. Tickets cost anywhere from R$10 for the cheap seats at the end of the parade. To R$110 to R$1,000 for prime seating, luxury suites can cost up to R$5,000.

Sector 5 and 7 are meant to be the best in the house because they are smack bang in the middle of the Sambadrome. This allows excellent views right up and down the Sambadrome parade route.

Join the Samba Parades at the Sambadrome

Want the experience of a lifetime the why not join in the samba parade! If you are willing to splurge and pay a membership fee of around $500 -$1000US, to one of the participating samba schools, you can join their school and march in the Samba Parades.

All you must do after you pay the membership is buy a costume and memorise the samba schools’ dances and you can be right in the middle of the action. It is the ultimate Rio carnival experience to not just watch but perform at the Sambadrome!

Where to stay for Rio Carnival?

If you’re wondering where to sleep during carnival in Rio, you have plenty of options. There are hotels, hostels, or apartments to rent for all budgets. The best place to stay is close to the blocos. There is no point staying around the Sambadrome because it’s not a great neighbourhood for tourists.

The best place to stay in Rio during carnival is in Rio’s Zona Sul which includes the suburbs of Copacabana, Ipanema, Leblon & the Centro, the most popular events happen in this vicinity. Staying here means your close to the action and close to Rio’s best beaches and shopping. Santa Teresa is also a good option it’s a bohemian neighbourhood that hosts some of the best blocos.

Check out some accomodation deals here.

Take a tour for Rio Carnival!

Leave the guidebook at home and experience carnival under safe and knowledgeable guidance. There are loads of Rio Carnival Tour itineraires you can check out on Tour Radar. Whether you want to samba in the parade, join a conga line with locals, or witness the parades, there is something for everyone.

Carnival in Rio is a crazy, hectic and chaotic experience, which is all part of the fun but if you want to have a hassle-free vacation then why not join a tour! Also carnival is better to experience with people so check out some awesome Rio Carnival Tours here.  Or even check out Viator which has hundreds of carnival tours and activities!

Cities all over Brazil have perfected their own unique way to celebrate carnival. We take a look at some of the biggest, best and most unique carnival celebrations in Brazil! 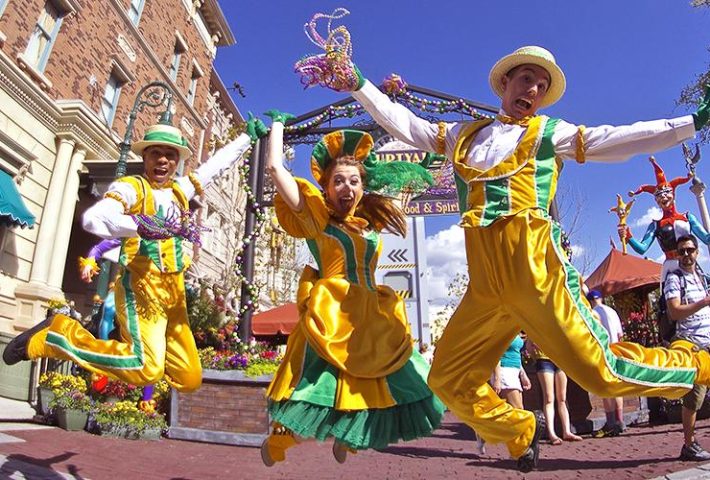 Everything You Need To Know About The Rio Carnival Balls!

Carnival Balls are an important part of Rio Carnival. Many balls are held with the most famous being the Scala Balls & the exclusive Magic Ball. Here is everything you need to know about the Rio Carnival Balls.

Masks, music, costumes, wine, food and floats! It’s that time of year again when the tradition of Carnival arrives in Italy again! So, it is time to dress up in your best costume and mask, forget about your worries and celebrate life! And no celebration is bigger or livelier than Viareggio Carnival! One of the most important and re-owned carnivals in the world with its grander float parade!