Welcome to Putignano, a Carnival rich with history and one of the most enduring traditions in the world. The floats and festivities in this Italian city are sure to impress you.

When is Carnival celebrated in Putignano in 2023?

What is the Carnival of Putignano?

The Carnival of Putignano is a mix of culture and entertainment that is sure not to disappoint you. A combination of mystic, pagan, traditional, and modern elements will make you fall in love with this Carnival that begins on December 26th.

This Carnival is not held on consecutive days, so be sure to check the schedule carefully and choose the dates you wish to attend.

The floats and the Propaggini are the main attractions, and throughout this article we will explain the key points to ensure you have a unique experience and know where and how to celebrate.

You may be interested: 10 Amazin Places to Celebrate Carnival in Italy

How is Carnival celebrated in Putignano?

The objective of every Thursday is to depict a story and present a specific social group: in an unchanging order, it begins with the Monsignori, followed by the Priests, the Nuns, the Vedovi, the Pazzi (that is, the unmarried youth), the married women, and the icing on the cake, the Cornuti (married men), in an event curated by the Accademia delle Corna, characterized by the goliardic ritual cutting of the horns.  From one Thursday to the next, from one tradition to another, float after float, we make our way to Mardi Gras, the closing day and the grand finale of Carnival. The 365 beats on the Macaroni Bell official mark the end of the festivities and the beginning of Lent.

History of Carnival in Putignano

The origins of this fantastic Carnival date back to 1394, specifically the 26th of December, although it is believed to be even older. In 1394, the Knights of Malta, who governed at the time, took the remains of St. Stephen from the abbey near Monopoli to the Santa Maria La Greca church in Putignano to protect this treasure from the attacks of marauders.

When the remains arrived to Putignano, the residents followed the Knights of Malta, accompanying them to their destination; then, a religious ceremony was held and later the residents organized a large party to celebrate how proud they were to possess such an important relic.

This party took place in the form of recitals of verses and improvised satires that evolved into what is today known as the ‘Propaggini’, a custom that is still celebrated.

This is the beginning of the Festa delle Propaggini, which, every December 26th for the past 622 years, has indicated the start of the biggest Carnival of Italy as well as the oldest in Europe: the Carnival of Putignano.

In the first half of the 20th century, the dominance of artisans in the city made their important entrance to the Carnival of Putignano, providing the city with art, passion, and competition.

Over time, the small wagons decorated with straw puppets and rags gave way to the first iron floats covered in paper.

The parade of the floats draws spectators from all over the world, and one of the main attractions, Carnival, which is no longer a exclusive affair of the peasants, encourages everyone to participate in the celebration, a celebration for everyone.

One of the key points of this Carnival is the Festa delle Propaggini, and it is always celebrated on the 26th of December.  This festivity includes poets called ‘offspring’, who are the main actors in this unique celebration.

The offspring are dressed in peasants clothes with workers’ tools from that time period. In their performances, they recount the previous year using satire and rhymed verses. It is a way to draw out all the bad things from the previous year and show it all to the local residents in an unusual manner.

This celebration is held in the Piazza Plebiscito where the Cèppone ceremony is held as a sign of the start of Carnival.

The offspring are judged based on a series of metric and contextual areas that they must not stray from: satire, dominance of the local dialect, respect for tradition, effectiveness of the text, and musical and stage performance.

Even if you don’t speak Italian or the local dialect, this is a spectacle worth viewing as it evokes centuries gone by and undoubtedly will take you on a journey through time.

In 2023 the incredible Carnival of Putignano will transform into a giant fairy tale, as this was the theme chosen for the celebration.

All the floats that parade in the Carnival of Putignano in 2023 will center around the key theme of fairy tales.

Every year the theme changes and it is a challenge for the master artisans to see what they can produce with their tremendous talent.

Floats of the Carnival of Putignano 2023

‘Evolution’ is the magical word for Carnival in 2023: each float, as in a musical, must evolve, mutate, change, or reveal itself over the length of the parade and tell the viewers a story. From ‘once upon a time’ to the arrival of the unexpected, to the unveiling of the story to the spectators.

In the papier-mâché workshops, the master artisans and their assistants are already working, writing, and re-writing the fairy tales that every child has grown up with over the years. Stories of toads and princesses, ogres, knights, and puppets are ready to be reborn, to be transformed into papier-mâché puppets and tell their story in a new way for Carnival 2023.

Farinella is the typical mask for the Carnival of Putignano.

Its name comes from a typical dish from Putignano made from a fine flour, obtained from chickpeas and toasted barley, which were the main sources of food for poor peasants.

Farinella is a fusion between a Harlequin mask and a Jolly Joker, wearing a costume with multicolored patches, a red and blue skirt—the colors of the city—and a bicorne with bells, a symbol of the three hills on which Putignano is located.

Lively and jovial, with those teasing eyes and that ironic smile, it summarizes the character of local residents of Putignano: provocative, ironic, full of life, wine and food lovers.  Proud of their region and their dialect.

Farinella is the symbol of a Carnival that lasts all year long, a celebration that embraces happiness, reflection, melancholy, joy and excess.  In a word, life.

Where to stay in Putignano?

Putignano offers accommodations for every budget, from five-star hotels to hostels and rooming houses.

Book your Hotel and Flight for the Putignano Carnival

What to see and do in Putignano

The ‘Putignano Cave’ is a stunning spot, discovered in the 1930s and full of alabaster creations.

Putignano is more than just Carnival

The Carnival of Putignano is something more than everything that can be seen there; behind this spectacle are hidden centuries of history and a tight-knit relationship with its folklore. The master float builders are exquisite experts that have mastered this art like few other places in the world.

These giant floats could easily be considered sculptures at any museum; the techniques they use generation after generation make the construction of these floats nearly flawless.

The workshops work with determination, perseverance and dedication throughout the whole year. There is always a stove with a coffee pot or a pan cooking because in the weeks leading up to Carnival everyone has dinner together and spends the night inventing, designing, and molding. These groups become a family, works of art that take shape from one minute to the next and finally come to life.

Carnivaland recommends tours, events and accommodation based on our extensive experience and knowledge of them. We may earn affiliate commission from affiliate links in this article. Read more about our policy.

Sao Paulo Carnival is one of Brazil’s best carnival celebrations. It puts on Samba Parades that can easily rival the ones seen at Rio. 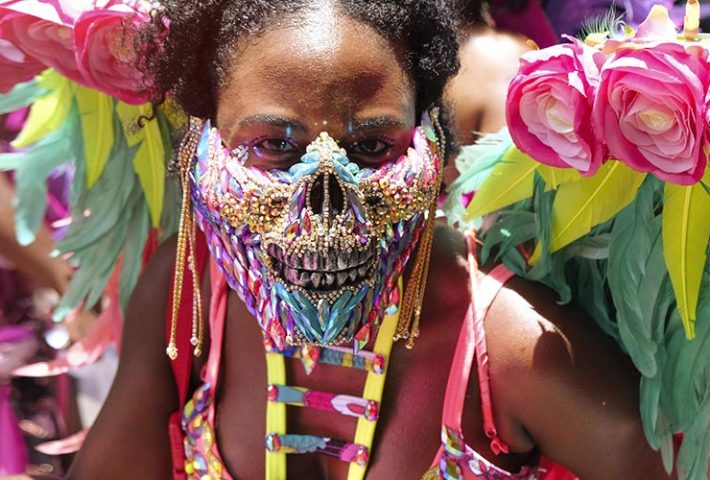 Carnival of Santiago de Cuba is said to be the soul of the city. It is the event that the locals spend an entire year planning for and looking forward too! It is all about music and dance and is famous for their comparsas!