Carnival Masks, their Origin and History

Mask in history have been one of the most sacred objects for many of civilizations. To understand what why they are, it is necessary to delve into their history.
Table of Contents
Add a header to begin generating the table of contents

Origin and History of Masks Carnival 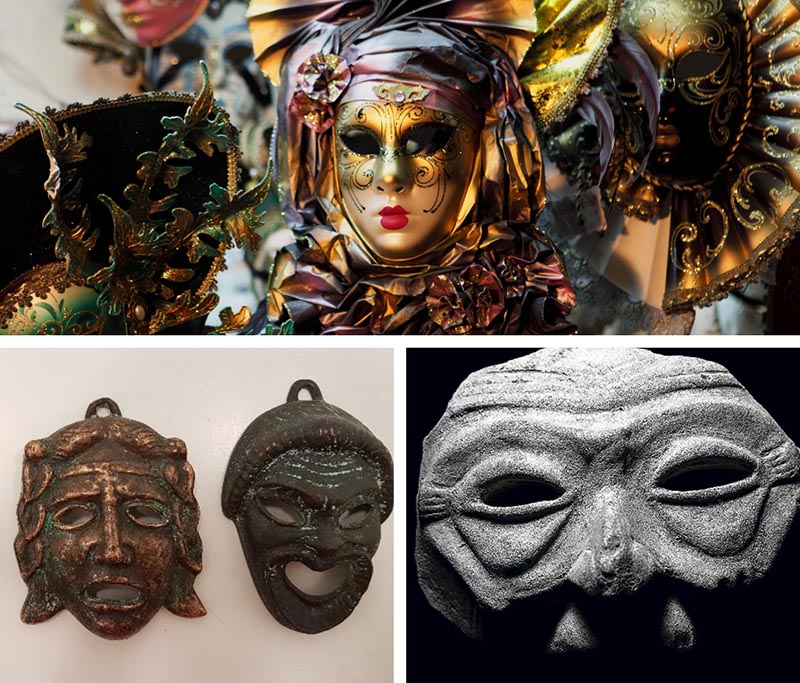 The origins of the masks of the world dates back to the beginning of time. These historical masks have held different spiritual significance and had different purposes to man, depending on the era. A mask can reveal a lot about different civilisations in history. They can tell you if those if they were reckless or feared, aggressive or friendly and even inform you about their ethics and morality.

Throughout famous masks in history there were many differences as well as many things in common about the value masks held to different societies and civilisations. The pre-Columbian Masks like the Shamans of Andean tribes represented devils and gods and were used as a way of communicating with the afterlife.

The word mask comes from the Latin “mascus” and “chew” which means ghost. In arab face mask history, “maskharah” literally means jester and man with mask.

The Greeks and the Romans were the first society to wear masks that covered their entire heads and would also add false wigs, ears and noses to give it a more theatrical touch. Because the main reason why these ancient masks were used was for theatrical purposes.

Masks throughout history were mainly used in plays because the masks brought them closer to the appearance of the character they were trying to portray. Thanks to face masks, the actors were able to transform into another creation. This was the earliest form of special effects in the history of masks around the world.

Masks stopped being used so frequently in Europe for a few centuries until the Renaissance period when they made a comeback. Still to this day everyone knows the Venetian Masks which were a key feature of Venice Carnival a 1000 year old celebration. The use of different masks from around the world was established by this carnival.

There are many questions we ask ourselves when we think about carnival masks, such as: When were masks invented?, What was the evolution of masks?, What is the history of wearing masks?, Why were masks invented?, How long have masks been around?, What is the use of masks in history?, When was the first mask made?, When were masks first used?… In this article we will try to give you the best possible answer to these questions.

Check out some amazing Carnival historical masks on Amazon here.

Throughout types of masks in history around the world have been created, and in this article we have selected some of the most exotic ones.

These are some of the ancient, traditional and famous historical masks from different cultures around the world that use masks:

African masks were normally made out of wood because it was believed wood was a living being with a soul and could therefore acquire the properties of the tree by obtaining part of its strength.

These masks were found in different parts of Africa such as Cameroon, Nigeria, Gabon, Kenya and West Africa. The majority of these cultures shared was there love for nature and there want to be in harmony with the environment. They felt a love and respect for everything that surrounded them, and believed that they were part of a whole.

Check out Amazon for some amazing African masks here. 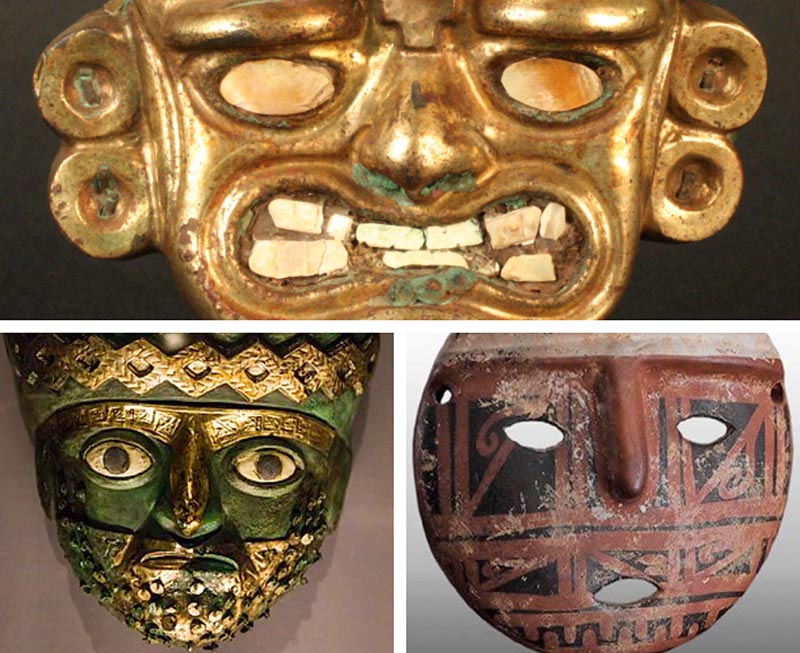 Masks have also been found in the Aztec cultures in various regions of what is now Mexico and Peru. They used them mostly in public events, religious ceremonies and even during some battles in local wars.

The pre-Columbian masks were considered a very valuable object in their day because they were used as an offering to the gods. In the Olmec culture in the Gulf of Mexico masks carved in stone from 1000 BC were found. These masks are famous for their gestures, thus suggesting human faces mixed with those of animals. A clear sign that they believed in the supernatural and felt connected to their environment.

In Mexico they also found another type of masks belonging to the Teotihuacan. These masks date back to the 1st century. They have more human and serene expressions, which makes them think that they had a more devotion for the Earth than for the divine.

It is believed that they stopped being used when the Spanish conquerors saw them wearing these masks because the Spanish saw it as a danger in the converting the indigenous people to Christianity.

Check out Amazon for some amazing Pre-Columbian masks here.

In Egypt most of the masks had a funerary use. The Egyptian masks were a clear example of his belief in life after death. These masks were designed to cover the faces of the deceased and prepare them for their new life.

At first the masks used in the Egyptian culture were made of materials such as lime, wood, linen and fibres. This way of making the masks was perfected to such an extent that they were able to make them completely in gold.

As you can imagine the Egyptian gold masks were reserved for the pharaohs because it was a symbol of status and a way to differentiate the pharaohs from the rest of society.

The masks were not only used for the dead, but they were used to represent the gods in sacred ceremonies. Horus was represented by a hawk and Anubis by a jackal. These masks have been the key to understanding the scale of beliefs in ancient Egypt.

Check out Amazon for some amazing Egyptian Masks here.

In ancient Greece we find a paradigm shift with respect to predecessor cultures.  While earlier civilisations used the masks for sacred rites, rituals, and to connect with the afterlife. In Greece we observe how they begin to use them for artistic activities such as theatre.

This change had its origin in divinity because masks were used in rituals in honour of the god Dionysus. In these rituals, they would dance and sing and perform ancient stories. This was before the birth of the theatre.

The Greek masks in theatre were divided into three styles. The comic masks were often crude and exaggerated the features of the face, essentially being the first cartoons of the history of the masks.

The satirical masks were more fantastical, mixing elements of animals with human features. The tragic masks were often the most beautiful, because they were associated with love, lack of love, loss, and would give a touch of reality with flashes of beauty, that would allow people to feel empathy.

The Greek masks were another incredible element that gave us the ancient Greek culture contributed to the world that  have gone onto to be important art forms today that we enjoy through film, comedies or television.

Check out Amazon for some amazing Greek Masks here.

The Venetian masks are perhaps one of the most universal icons of the carnival! Although they were not always as we know them today. In principle they were rather theatrical, the Venetian actors used them in the represent their works. The masks looked different before they became a universal hallmark of the carnival.

The Venetian mask changed roles when it came to carnival. The masks were worn during carnival so that one could become anonymous. When you become anonymous you could be who you want and in many cases do what you want, freedom and immorality were two good reasons to wear them. It allowed the rich to mingle with the poor or a bored housewife to enjoy a fling.

The rise of the Venetian masks transgressed the carnival. And have become parts of numerous events that are not even related to carnival, like political meetings, or used in the theatre.

Check out Amazon for some amazing Venetian Masks here.

Here you can read the best article about the Venice Carnival 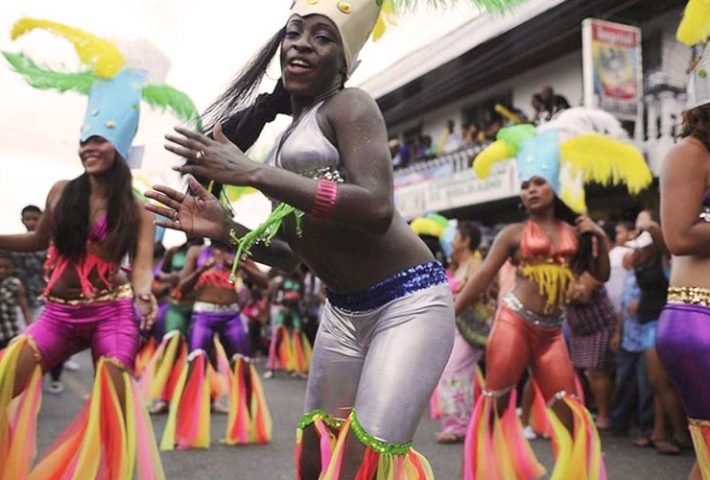 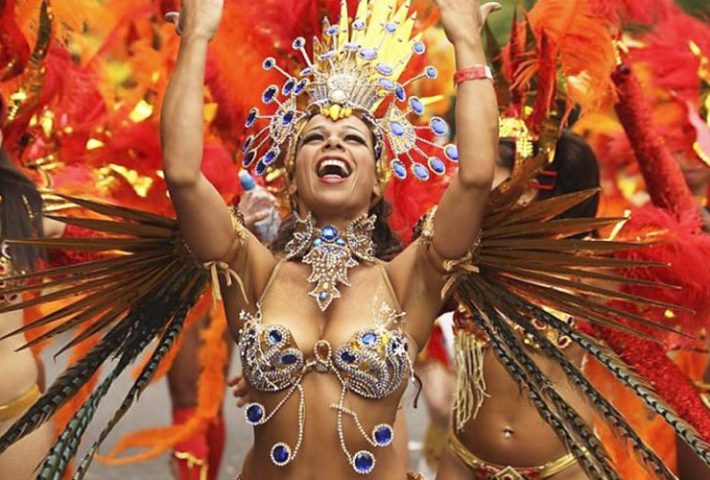 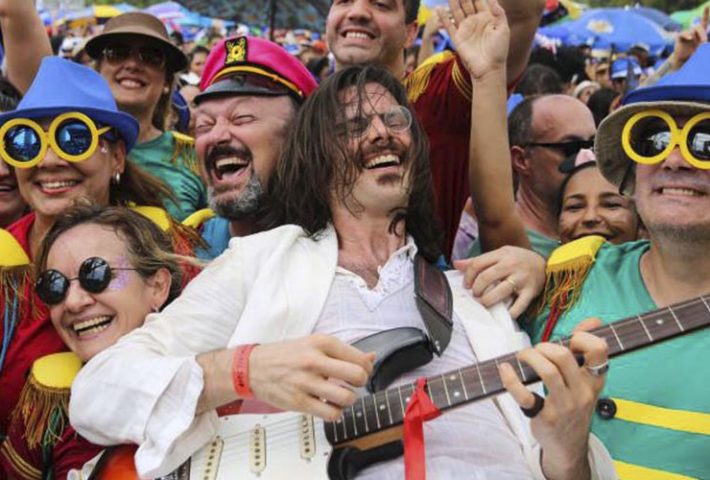 Aisha Noel is an up-and-coming Trinidadian star whose career is gaining lots of momentum. She is talented, beautiful and has an incredible voice! She is on her way to stardom!