Limoux Carnival is a traditional folkloric carnival that is over 400 years old. It runs from January until April making it one of the longest carnivals in France!

What is carnival in Limoux?

There are not many carnival seasons that run for three months!! But the annual Limoux Carnival or Carnaval de Limoux in French does. Limoux Carnival declares itself the longest carnival in the world and begins at the start of January and continues right until the start of Lent. Carnival in Limoux has been officially celebrated ever since 1694!

Every year the beautiful medieval city of Limoux comes alive with the sights and sounds of Carnival. This celebration brightens up the winter months and is an important part of Limoux’s cultural identity and heritage. Limoux Carnival is celebrated in the town’s traditional language, Occitan.

Limoux is an Occitan town that lies in the beautiful Aude department of sunny Languedoc-Roussillon. It is in the heart of the Cathar Country, in southwestern France. The Michelin Guide described the town as one of the “most beautiful detours in France”.

When is Limoux Carnival?

How do they celebrate carnival in Limoux?

Well the French love a party and the Limoux Carnival is no exception, it is one heck of a party! For over 400 years, thousands of people from all over, fill the square in the centre of Limoux for parades, parties, exhibitions and all sorts of events. It is tradition to drink the towns famous white sparkling wine known as “Blanquette de Limoux”.

Limoux Carnival dates back to the 14th century and apparently started when some local millers had finally completed their tax payments to the local monks. They were so excited that they paraded out the cities gates dancing and were accompanied by musicians. They handed out flour and treats to the local townsfolk as they went along. This celebration has been kept alive ever since.

Limoux Carnival is full of local folklore. Carnival groups called Guilds, who are locals hidden by masks to disguise their identity, walk around the town accompanied by musicians, entertaining and annoying people. Essentially Guilds go around making a big spectacle around the city’s main square. Everything is conducted in the ancient Occitan language.

There about 30 carnival bands or Guilds, that take part in Limoux Carnival and each band has around 15 musicians. Each Guild represents either a local district. The ‘guilds’ go around playing music and sing songs. The songs are usually satirical by nature to entertain, criticise or annoy. They also play traditional music on trumpets, basses, bass drums and clarinets.

Every Saturday and Sunday from the start to finish of Limoux Carnival there are three parades a day each held at different hours of the day; 11am, 16:00 and 22:30pm. The parades are held in the middle of Limoux’s medieval centre. The main character is the masked, flour millers, who are dressed head-to-toe in spotless white.

Everyone participates in Limoux’s carnival. The parade is made up of the guilds, goudil’s which are clown like characters, dancers, musicians and ordinary people The dancers are all masked in colourful Pierrot costumes and wear fine gloves and pretty shoes.

Large crowds of people all congregate in the Place de la République, which is the centre of Limoux, a pretty area filled with stone arcades and timber-framed houses. They all sing, dance and perform throughout the city’s main square and streets. Traditional folk music accompanies the parade as they weave their way through medieval archways.

The night parade is statelier. It is a magical procession that features lots of torchlights, it looks like ghosts are passing by you.

Burning of the Carnival King

On the balcony in the main square is a straw dummy who represents the carnival king. He overlooks the procession. On the last night of carnival is judgement day, and a court procession is held. It is a judgement of the carnival king, called the Blanquette, after the town’s famous wine.  They find the carnival king guilty of sinning during carnival and he tossed into a large bonfire.

Carnival participants also gather in Limoux’s main square and also toss their masks into large bonfires showing ‘Adieu paure Carnaval’ (‘Farewell to the Carnival’). The participants then enjoy a delicious feast and eat a local delicacy, the Limoux Cake, which is washed down with sparkling wine.

We highly recommend if you are already planning on attending carnival, that you extend your trip and visit two of the world’s best carnivals! Unfortunately, most carnivals take place at the same time, in the days prior to Lent. But Viareggio Carnival in Italy occurs not once, but five times in the lead up to Lent! So, it’s one of the only other pre-Lenten carnival’s in Europe that you can also visit!

And what is more fun then celebrating carnival once, is celebrating it twice! Viareggio Carnival is one of worlds most renowned carnival celebrations, and rightly so because this Italian town puts on a carnival that is like nothing else in the world! What separates this carnival from the rest, is their awe-inspiring floats! Viareggio Carnival holds the title of having the ‘world’s best carnival floats!’ No other carnival even comes close!

And at Viareggio, carnival is just icing on the cake! Because this carnival takes place in gorgeous Tuscany, one of Italy’s best regions! A region that is famous for its art, architecture, history, culture, picturesque landscapes, great food, great wine and the best of Italian hospitality, that you can enjoy while experiencing the magic of this carnival!

How to get to Limoux?

The closest airport to Limoux is Carcassonne airport which is about a 20-minute drive away. Limoux train station is also a hub in the French transportation network.

Where to Stay in Limoux 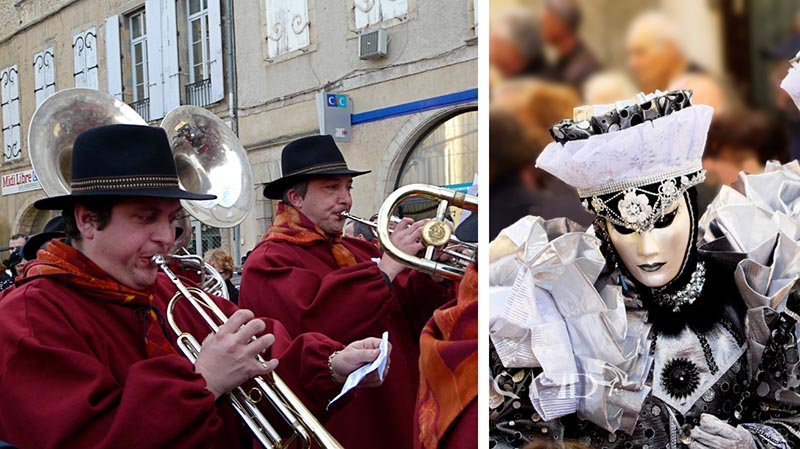 Limoux has a few accommodation options, but we recommend the Hôtel Le Monastère which is actually a former medieval monastery!! The Moderne et Pigeon is also another really unique 18th century building.

What to do and see in Limoux

You will also discover many fortified gateways in the town and renaissance and medieval houses. There is also the Saint-Marten Church built in the 12th century. The Aude river sits behind the church and from there you can see the old bridge which dates back to the 14th century with its six stone arches.

Limoux is famous for its sparkling wine, Blanquette de Limoux which is the oldest sparkling wine in France, dating back to 1531 when Saint Hilaire Abbey discovered that some wine had fermented and formed bubbles. The locals say the process was stolen by Dom Perignon who went on to create champagne. However the Limoux Sparkling Wine is a high quality champagne and you must try it while in town!

On the edge of Limoux is the Jardin au Plantes Parfumees de la Bouichere which has thousands of fragrant plants in the garden. North of the town centre is the Basilica of Notre-Dame de Marcxielle an incredible 14th century gothic style church. And the fortified town of Carcassonne is worth visiting which is close to the region of Limoux.

The Paris Tropical Carnival is the highlight of the Parisian Summer when Caribbean culture takes over the city of Paris.

Basel Fasnacht is the biggest carnival celebration in Switzerland which occurs during Lent. For 3 wonderful days every year the town descends into colour and chaos.

Salvador Carnival is the largest street party in the world and many say is the best place in Brazil to celebrate carnival! Here is everything you need to know about attending carnival in Salvador, Brazil!

Crop Over in Barbados is the most anticipated event of the year! It is a whole month of celebrating with parades, parties and live music. You haven’t lived until you have experienced the carnival spirit that is felt in Barbados during Crop Over!

Whitley Bay Carnival is a fun for the entire family to enjoy. Filled with lots of live music, entertainment, food and drink vendors and of course a colourful parade.