The Guadeloupe Carnival is a two-month carnival celebration that occurs before Lent. It is a colourful spectacle full of parades, costumes and tradition.

When is Carnival in Guadeloupe?

Guadeloupe is a gorgeous Caribbean island with year-round sun, pristine beaches and where a laid-back vibe fuses with French suaveness. Guadeloupe is a French island in the Antilles archipelago of the Caribbean.

It comprises of five main islands located in the Caribbean Sea in between Antigua and Dominica. The capital is Basse Terre where most of the carnival activities occur.

What is Guadeloupe Carnival? 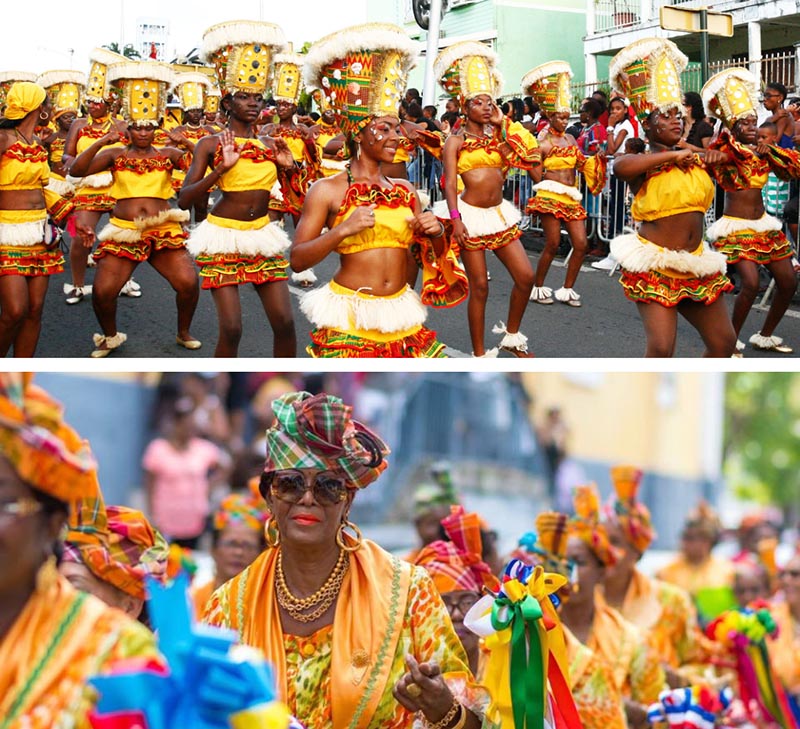 The Guadeloupe Carnival is one of the most important festivals on the island. This event is not just popular with locals but also attracts lots of tourists to this gorgeous Caribbean island to celebrate carnival.

The origins of Guadeloupean carnival began back when the early European settlers introduced carnival to the island back in the 17th century. The original carnival celebrations were private parties and masquerade balls that were held before the onset of Lent.

These early carnival celebrations did not allow for slaves and in fact the slaves were not even allowed to assemble together, a law that was in place in 1685 by the French King.

The carnival evolved and began to embrace more Caribbean culture and become uniquely Guadeloupean with some minor European traditions.

How is Guadeloupean Carnival celebrated?

Today Guadeloupean carnival is celebrated through many different events. There are song and dance contests, costumed parades, street parties, the popular crowning of the queen, live music performances and lots of feasting and drinking!

However, it is the three parades that occur between Shrove Sunday and Ash Wednesday which are the peak of Guadeloupean Carnival and occur on the three biggest days of celebration and jubilation.

Guadeloupean Carnival officially begins on the 1st January with a parade called “groupes à peau,” which is all about the participants bringing offerings to the sea. This is a tradition that is about leaving the past year and all its issues behind you and attempting for better luck in the new year. 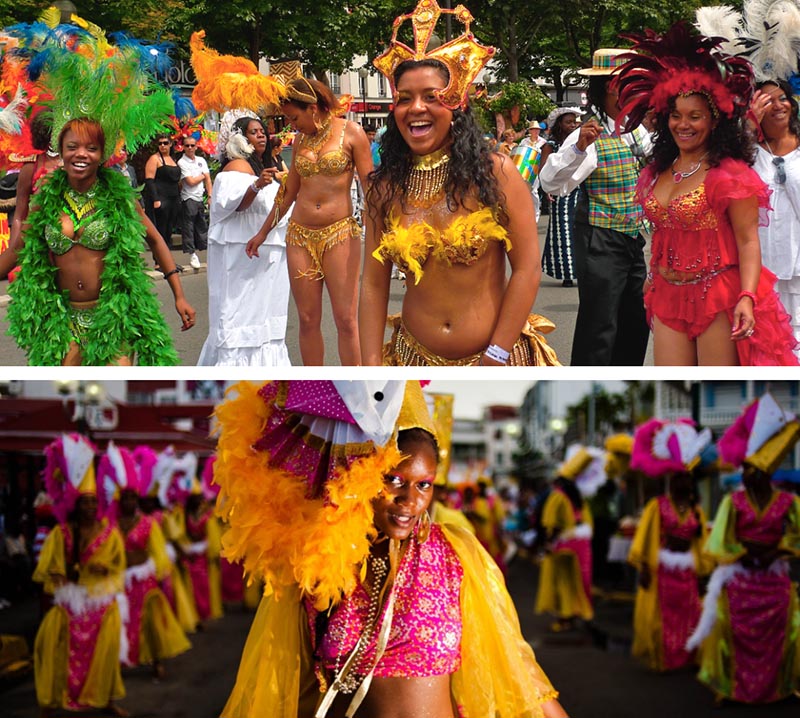 The Guadeloupean carnival groups spend months of hard work planning for the Guadeloupean Carnival parades. The planning that goes into selecting a carnival theme and then creating intricate dance routines, elaborate floats and beautiful colourful carnival costumes is intense.

The Guadeloupean carnival groups compete in the Guadeloupe Carnival Parades for prestige and cash prizes. The groups are judged on who has the best music, the best float, best costumes, best décor and the main prize on who is the overall best Guadeloupean Carnival Group.

Dimanche Gras is a parade is held on Shrove Sunday in Guadeloupe’s largest city Pointe-à-Pitre. The Dimanche Gras features a large procession with over fifty different carnival groups from all over the island performing in the parade.

More than 100,000 people come out to witness this parade. It is a majestic parade with incredibly colourful costumes and perfectly orchestrated dance routines and music. The parade starts in the afternoon and runs till late evening.

The streets are full of excited revellers who don masks and costumes themselves and roam around with lots of festive spirit. This parade is when the Carnival Queen and Vaval makes an appearance.

On Fat Monday first thing in the morning is a pyjama parade that is held across Guadeloupe in the early morning that unlike the previous parade is a spontaneous procession. Anyone who wants can participate they are just required to wear their pyjamas, dance and have fun!

Rose Monday also sees two amazing evening parades in Guadeloupe’s capital city Basse-Terre and Saint-François. These are two incredible evening parades that are light parades. Every costume and float has been created to light up the night.

Lundi Gras is also the day of burlesque weddings. Today is when you will see many couples cross dress in each other’s clothing. So, don’t be surprised to see men walking around in dresses.

Mardi Gras which is held on Fat Tuesday also known as Shrove Tuesday is the biggest day of partying and celebrations. The biggest parade is held in Guadeloupe’s capital city Basse-Terre. It is also when the famous Red Devils accompany the floats.

Vaval is the Guadeloupean Carnival King he is actually a satirical mannequin that generally represents a public figure. He is featured in all the parades. The Carnival Queen is a real woman who is selected from various villages and is always seated beside Vaval in the parades.

What makes Guadeloupe carnival super unique is the Ash Wednesday celebrations. On Ash Wednesday the revellers are all dressed up in black and white clothing as a sign of mourning. This is a stark contrast to the previous Guadeloupean Carnival Celebrations which saw an explosion of colour.

All the Guadeloupe Carnival celebrations end on Ash Wednesday after the funeral for Vaval the Guadeloupean Carnival King. Vaval is burnt at the end of the funeral while everybody sings in Creole “Vaval ka kité nou” which translates to “Vaval leaves us”, some of the audience pretend to cry and carnival is officially over.

After the Guadeloupean Carnival everything on the island gets pretty calm and quiet until Easter with one exception. There is one day in between called Mid-Lent Thursday which falls halfway between Ash Wednesday and Easter (20 days after the beginning of Lent).

Mid-Lent Thursday is a public holiday in Guadeloupe and allows all the people who have been ‘good for Lent’ to revive the Guadeloupean Carnival Spirit but only for one day and there is little twist as revellers must depict themselves as devils and dress up in red and black costumes.

How to get to Guadeloupe?

Once you’re on the island there are many ways to get around boat, bus, car, and even domestic flights to the other islands.

Where to stay in Guadeloupe?

Most accommodation are small hotels and guest houses that are locally owned and operated. Whether you want a stunning beach front location nestled amid the palm trees, or a private villa or some eco-tourism there are plenty of places to suit all accommodation requirements. Check out some great options and deals here.

Book your Hotel and Flight for the Guadeloupe Carnival

What is there to do in Guadeloupe?

There is lots to do and see in Guadeloupe! Guadeloupe is filled with activities and attractions. All of Guadeloupe’s main five islands have gorgeous colonial homes and forts. The markets are bursting with shops, colour and activity.

The islands are blessed with lush tropical forests and waterfalls protected in a national park. You can go butterfly watching. Of course, the beaches in Guadeloupe are pristine white sand beaches with beautiful coral reefs that are perfect for swimming, snorkelling, scuba diving.

For more information about tours, things to do, sightseeing tours, day trips and more click here. If you are lucky enough to have a longer vacation then check out some awesome tours on Tour Radar here.

The main tourist areas of Guadeloupe are pretty safe these include the centre of Point-à-Pitre, Le Gosier, St. Anne, St. Felix. At night you need to exercise more caution and avoid walking around alone and leaving the main areas.

Do be of aware your belongings because large crowds during carnival mean that some pickpocketing may occur.

So be aware of your valuable at all times or even leave them back at your hotel and only bring some cash with you. Or check out Amazon and invest in one of these travel safety accessories, like a fanny pack hidden under your clothing to store your essentials in. If you have to take your phone out with you, don’t have it on show for long 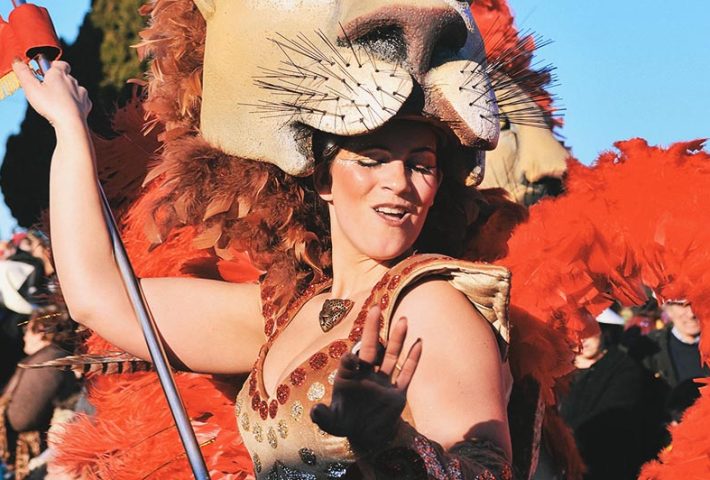 St Lucia Carnival is a vibrant display of local culture and heritage which takes place in one of the most beautiful places on earth, the beautiful island of St Lucia!

Foiano della Chiana Carnival takes place in a tiny rural community in Italy but is one of the country’s most famous and oldest carnivals.

Ivrea Carnival is held every year before Lent in Northern Italy. It is famous for its 3-day Battle of the Oranges which commemorates a Middle-Ages event.

Among the most unique festivities, the Havana Carnival is one of the most important on the island of Cuba.