When is the Festival of the Virgin of La Tirana?

Where is the Festival of the Virgin of La Tirana?

The celebration takes place in La Tirana, Chile. La Tirana is located in the Tarapaca Region in Northern Chile, and is about 45 miles from Iquique, a coastal town on the pacific.

What is the Festival of the Virgin of La Tirana?

Fiesta de la Tirana is an annual celebration that takes place in La Tirana, which is located in the Tarapaca Region of northern Chile. This celebration occurs to honor the Virgen del Carmen. This celebration is the biggest localized religious event in Chile and attracts around 250,000 visitors to this tiny village of 1500 inhabitants.

The visitors come to dance, hear music, pray and pay homage to the Virgen del Carmen, who is the national patron saint of Chile. Over 207 religious brotherhoods from Arica to Copiapó,  participate in this event. This is a beautiful celebration that attracts visitors from not just all over Chile, but from all over the world!

Because this celebration is so large, and the town only has 1500 inhabitants, during the celebration, community-based systems of commerce, housing and healthcare are put in place. Law enforcement is brought in from surrounding areas. Furthermore there is a mandatory dry law on during the celebration, with alcohol checkpoints at every entrance, to avoid public drunkenness.

What is the history of Fiesta de La Tirana?

The story about the origin of The Festival of La Tirana dates back to 1540, when an expedition led by the discoverer of Chile – Diego de Almagro, arrived in the area. It was there that they met an Incaican Princess named Huillac Humu, who due to her hostile attitude towards the Spaniards was known as La Tirana or the tyrant in English

But La Tirana ended up falling in love with one of her Spanish captives named Almeyda. She was so in love with him that she even wanted to marry him and become a Christian. Her community was so outraged that they killed both the princess and her lover.

Around 1650 Antonio Rondon built a hermitage next to the cross of her grave. In the 18th century a little town and church was created in that location. Today there is a Museum – Museo de La Tirana located in front of the church. The lovers remain buried in the place where the festival is celebrated.

While today La Tirana Festival is a celebration that is done in the name of the Virgen del Carmen, it still has many traditions that stretch back centuries to the indigenous Andean people. The masks, costumes, music and dance all have historical significance. Descendants of these indigenous persons still travel to the festival to make promises to the saint and to receive blessings.

How do they celebrate La Tirana Festival?

La Tirana Festival is celebrated with lots of religious ceremonies, local instrumental music performances, dance performances and parades. The celebrators dress in colorful traditional clothing and the events are an incredible combination of European, Mestizos, Creoles and Indian culture.

The festival has about 250,000 visitors who come to make offerings, promises, give thanks and pray to the Virgen del Carmen and receive blessings. She is the protector of Chile and believed to be the guardian of the armed forces, navy and police. Believers make their promise to her and are obliged to complete their promises.

Dancing for the Virgin

Dancing plays a major role in the celebration of Fiesta de La Tirana. Dance groups known as bailes come to dance before the Virgen del Carmen, who is located in the sanctuary at La Tirana. Dancing before the Virgin is a very emotional experience. There are about 200 official dance groups from all over the country, who come to announce they have returned to fulfil their promise to her.

With so many dance groups, the performances run for days, and are scheduled around the clock. Every different dance group is assigned a specific entry time to see the Virgin, and they have 20 minutes to dance before her. The temple doors officially open on July 10th, and the bailes and pilgrims dance before the Virgin from July 11th until Jul 14th.

But before visiting her they must first dance at the plaza located at the entrance to the town, then in front of the statue of Cruz del Calvario (Calvary Cross), where a priest formally welcomes them and blesses the group. It is a sensory mosaic filled with lots of color, sound, energy and movement. The atmosphere and energy is electric and the central plaza is filled with thousands of dancers.

The dancers are dressed in the most beautiful costumes with lots of glitter and color. They enter the temple accompanied by their band and banner. Romantic melodies of vintage ballads, boleros and waltzes fill the air and where the songs of one dance group ends, another begins. The dancers offer their blood, sweat and tears to the Virgin.

Dancing for the Devil

One of the most important parts of the festival is the Danza de los Diablos, which in English means the Dance of the Devils. This was brought to Chile by Bolivian salt miners.

Throughout the festival you will see many people wearing fearsome costumes and masks, which are done to chase the demons away. The demon masks have bulging eyes, curling horns and bright colours.

At midnight the celebrations begin with people waving balloons and lights, orange lanterns float into the sky, the band plays music and firework displays surround the city. The dance groups take turn dancing and singing, and everywhere you look people are socializing and in good spirits. People stay up all night and dance groups continue performing in the square well after sunrise.

At 9am a major event takes place in the square. The statue of the Virgin, a smaller one from the temple, is lowered into the square. Hundreds of colored ribbons are attached to the base of her pedestal which are thrown to the audience, who hold them and sing while she is lowered. This is then followed by Mass.

At 2:30pm, a procession of the image of the Virgin parades its way through the streets, followed by statues of St Joseph who is her husband, and of Jesus. At each block, dance groups have the opportunity to sing to the Virgin, walking backwards, in front of her, so that they don’t turn their back to her.

Big crowds line the streets and follow the procession throwing confetti and shouting “Viva La Virgen”. The procession goes on for about seven hours, before it returns back to the temple. Inside the sanctuary some associations have been given the honor to sing before the larger statue of the Virgin.

Saying goodbye to the Virgin

While the dance groups don’t leave La Tirana until July 19th, the farewell song and dance to the Virgin, begins midnight after the 16th July. The goodbye dances can be even more emotional than the entrance dances, you will often see dancers crying. They are done in the same order as the entry dance and continue for 24 hours a day until the 19th July, except during Mass.

One week after the groups have departed La Tirana, they gather together in their home cities for a fiesta chica. This is a follow-up dance to La Tirana. Its purpose is to bring the devotion and joy of La Tirana, back to their own streets.

How to get to La Tirana?

The majority of people will travel to La Tirana from the coastal city of Iquique which is about 45 miles from La Tirana. You can fly to Iquique from Santiago in about 2.5 hours, and then take a taxi to La Tirana, which will take around 40 minutes. You can also reach La Tirana by road from the northern cities of Calama, Arica and Antofagasta.

Accommodation for the Festival of La Tirana

It is super important that you book your accommodation well in advance because there are limited hotels. There are also some private accommodation rental options and many locals will open their houses for the celebration. A lot of temporary housing is installed during the celebration for many of the dance groups.

Check out some accommodation options here.

Vincy Mas is the vibrant and colourful Caribbean carnival celebration that takes place on the island nation of Saint Vincent and the Grenadines. 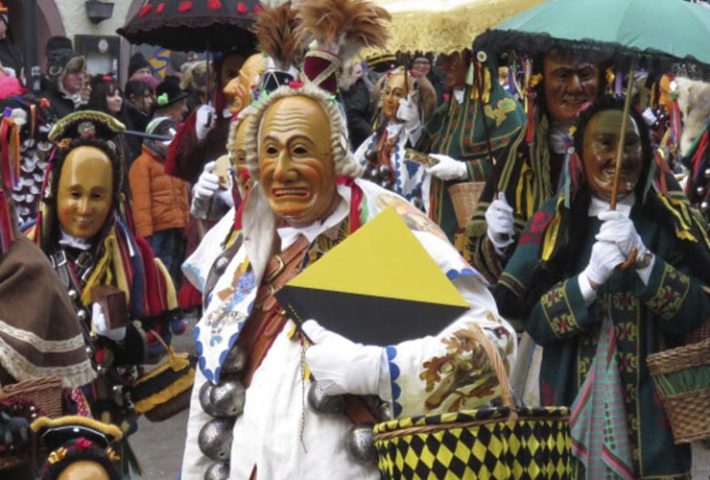 Goa Carnival is one of the few carnivals in Asia and the only carnival celebration in India. It is a colorful and vibrant celebration before the onset of lent. Here is everything you need to know about celebrating carnival in Goa!

The Cape Town Carnival is one of the treasures of Africa, a melting pot of cultures that has an amazing parade, epic floats and music that will leave its mark on you forever

The Royal city of Solo in Central Java, Indonesia hosts the annual Solo Batik Carnival every year to shine a light on Indonesian culture and heritage.