In the middle of the Caribbean Sea, but dependent on Grenada, Carriacou is an island that celebrates carnival in the best style of street dancing and where bright colors are the protagonists.

When is the Carnival of Carriacou 2022?

The Carriacou carnival is scheduled to be held on February 28th and 1st, 2022. In this festival, different cultural traditions, island music, food with various spices and the joy of the residents and those who visit the island to enjoy the moment are mixed.

Despite being an island, it is usually very frequented by tourists who are attracted by the intense blue of its beaches and the flora and fauna on its land.

Where is the Carriacou carnival?

The island of Carriacou, also referred to as Cariobacú, is the epicenter of this event that takes place in February and every time it feels much more charged with joy and emotion.

This island is located in the Caribbean Sea but depends on Grenada and has an estimated population of 6,063 inhabitants, according to a 2001 census.

Carriacou’s climate varies between 26 ° C between January and February, and 28 ° C from July to November, making it an island with the perfect temperature for swimming all year round.

Most tourists who visit the town prefer it for snorkeling, among other water activities.

What is the Carriacou carnival?

The Carriacou carnival is one of the most authentic in the world, as it surpasses fantasy and exposes creativity and joy in the costumes worn by the participants, inspired by the work of the renowned Shakespeare.

For this celebration, not only do they dress up and parade through its streets with the colorful costumes they make, they also perform traditional games to enjoy during the two days of the festival.

Despite being little time to celebrate, locals and visitors live this carnival in style, because during those days not only the joy is felt but the kindness of the islanders, who know how to make their tourists feel at home. .

How do they celebrate carnival in Carriacou? 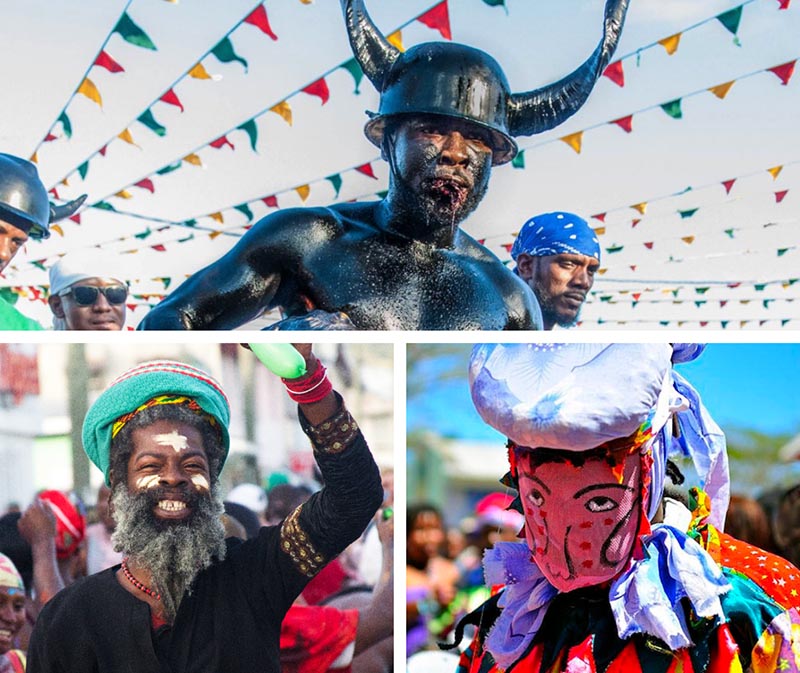 Carriacou is one of the islands that celebrates carnival in one of the most joyful and exciting ways that there can be, during this date various characters stand out such as Jab Jab, which is a man covered in black oil and uses a helmet with long horns, some hang heavy chains around their necks and carry a stick as a defense.

There are those who prefer to paint their body in cheerful colors and use a mask so that they are not recognized.

For this celebration, a dramatization is carried out called “Shakespeare Mas”, where the tragedy of the renowned Julius Caesar is recited.

Two rivals are the protagonists of a verbal combat where they compete for who can recite the most lines of the work without making a mistake, they do not follow the original plot and neither do they follow a single character, they usually exchange one by one.

The rivals, while reciting, have a whip in their hand, whoever makes a mistake will receive a blow from the opponent, the winner of this fight becomes the king of the carnival for that year.

They use this somewhat aggressive method to test the skills and memory of the participants. Once the winner is established, he will march accompanied by whoever wishes in search of a previous champion but in another town on the island.

At night, Monday Night Mas is held, where all those present use electric colored wands, which give it a party atmosphere and joy at the moment. They also meet to freely recite the story of Julius Caesar, but without any punishment involved, they only accompany the moment by drinking brandy.

Shrove Tuesday closes with the Fancy Mas, where women parade their fancy costumes with bright colors, which are loaded with stones and feathers alluding to the season.

The development of these costumes requires a long time in advance, which makes the excitement when February arrives even greater, since everyone will be able to see the works they were working hard day and night on.

During these two days of celebration, island music, calypso and soca is heard in each of the streets of the island, which motivates anyone to enjoy the atmosphere and let themselves be carried away by the emotion with which the Carriacou carnival is impregnated.

The neighbors usually get together to prepare a completely varied gastronomy together with natural condiments, which generally come loaded with the African seal, as it is the nationality of most of them. Wow!

Origins of the Carriacou carnival

The Carriacou carnival was born by the influence of the Africans and the British colony, since the island belonged to them in the past, but today it is under the command of Granada.

The mixture of African culture caused most of the current inhabitants of the island to be of this origin, which has allowed celebrations such as carnival to prevail.

How to get to Carriacou? 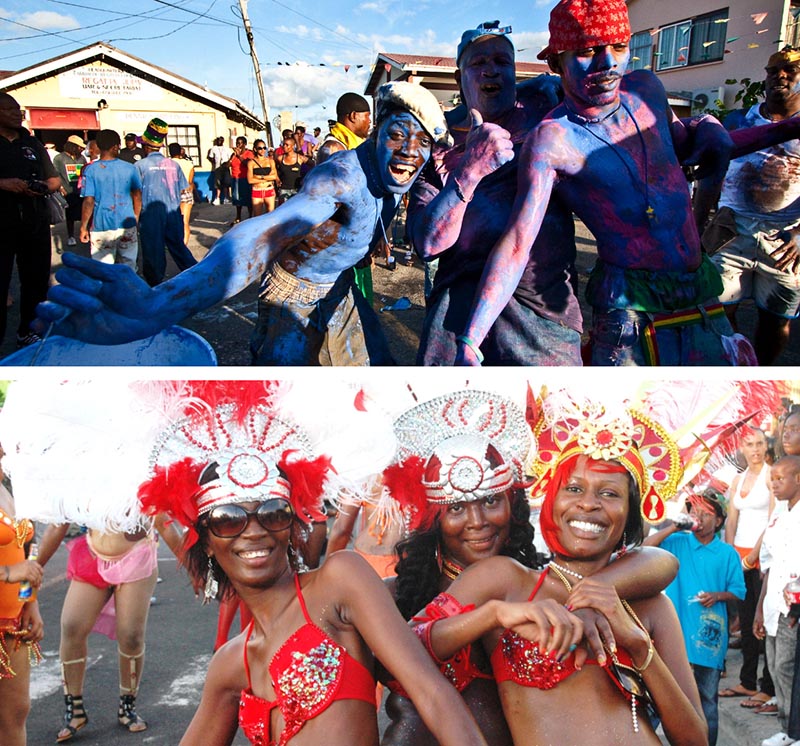 The island of Carriacou is not an easily accessible destination, you must first get to Granada, which you can only do by plane, generally, making a stopover in Port of Spain, or a Caribbean country. When you get to Granada you can take a ferry or a plane, which are the only means that will allow you to get to Carriacou. It is necessary to take provisions regarding the money that you will take to the island, since the currency of Grenada and Carriacou is the Eastern Caribbean dollar, so you must change it beforehand.

Book your Hotel and Flight for the Carriacou Carnival

Where to stay in Carriacou?

After such a busy day as those experienced during the Carriacou carnival, it is necessary to have a lodging place that provides comfort and convenience, that is why we present the following options:

What to do and see at the Carriacou carnival?

One of the main attractions of Carriacou are its beaches, as they have such an intense blue that it surprises anyone, below we will tell you a little about some of them:

Is it a safe city?

The crime rate is low, so tourists can feel safe while visiting Carriacou, but thefts of bags and other personal items are often very common, so they must be kept safe and out of sight.

Taxi drivers that belong to the Granada Taxi Association have additional training, so they are trained in any eventuality that may arise.

It is advisable to avoid walking on the beaches without company, as it becomes much easier to assault or attack people, since they are defenseless.

Tourists are recommended to keep their identity documents, such as passports, in the facilities of the place where they are staying, as they will not be necessary on a day-to-day basis.

What to eat in Carriacou?

When visiting Carriacou for its carnival festival, you cannot miss the dishes with the authentic Mediterranean stamp that will make you vibrate with excitement and pleasure. These are some of the restaurants where you can fully live the experience:

Undoubtedly, the Carriacou carnival will make everyone who decides to live them enjoy themselves. Dare yourself!

The Tampa Bay Caribbean Carnival is the place to go if you want to have the time of your life! It is a high energy, vibrant and colorful celebration that is all about celebrating Caribbean-American cul-ture!

Baltimore Washington One Carnival is all about retaining and promoting Caribbean Carnival to the community through colourful parades, funky music, great food and lots of fun! Here is Everything you need to know about attending this carnival!

St John Festival has been celebrated for 65 years! Is a vibrant display of local culture and heritage which takes place in one of the most beautiful places on earth, the beautiful island of St John!