Here are some must know Caribbean words & phrases that you may hear when you attend carnival in the Caribbean.
Table of Contents
Add a header to begin generating the table of contents

Mas is actually just short for masquerade. Masquerade in reference to Caribbean Carnival is the big parades that occur where the participants, who are known as masquerades dress up in costumes, masks and other disguises and dance or perform in the parade.

What is playing mas?

What is a Mas Band?

Mas Bands are organizations that are the heart and soul of carnival parades. They consist of a group of parade-goers, who all pay and wear a joint group costume and march in the parade together. Mas Bands are run by section leaders who every year come up with new themes and then design and create elaborate costumes for people to purchase.

If you want to be part of the parade you can’t just show up in a beautiful costume of your choosing. You must select the mas band you want to join, then purchase their costume, and on parade day you must wear their costume and dance through the streets with your chosen band.

What are Mas Players?

Mas Players are the parade participants who purchase a costume and march in the parade. The mas players are representing the band by wearing their costumes, dancing, singing as they march along the carnival route.

What is a Mas Camp?

Mas Camp is the meeting point for a Mas Band. This is where people will come to register with the band, pay for their costume, or pick it up when it is ready for distribution.

What is the Road?

When you are attending carnival in the Caribbean, you may hear people say “meet me on di road”. The Road is the parade route!

The judging point is the point on the parade route where the mas bands will get marked by a panel of judges to help determine the overall best mas band. The panel will judge on things like best costumes, creativeness and overall energy.

What is a Fete?

Fete is French for party. Often in the lead up to carnival and during the carnival season, there are numerous parties that take place. Often the parties are themed or have performances from top musicians or DJ’s.

J’ouvert is French for day open (jour overt). This is a sunrise parade that originated in Trinidad and Tobago’s Carnival and has since transplanted itself into many other Caribbean Carnival celebrations around the world. It is more spontaneous than the Road March. It can be a messy celebration where you will most likely end up covered in mud, oil, paint or baby powder

Canboulay is a celebration that celebrates the abolition of slavery. It has become a part of numerous carnival celebrations. Historically, the Canboulay was a night time activity where the slaves had to march through sugar cane plantations and put out fires. Today it is a torchlight procession that with costumes that is accompanied by drumming, singing and dancing.

What is the Front Line?

When it comes to buying a carnival costume from a Mas Band, the costumes that are designed for the Front Line are the more elaborate and extravagant costumes. They are usually have the largest headdresses and are adorned with loads of feathers, jewels and more. They also tend to be the most expensive costumes and sometimes selection of who can be in the Front Line can be quite exclusive.

What is the Mid Line?

Mid line costumes march behind the Front Line, and while their costumes are not as extravagant as them, nonetheless they are still impressive pieces.

What is the Back Line?

The Back Line costumes march at the back of the band and their costumes are not as extravagant as the other two sections. They have less attachments, feathers and adornments. Sometimes they will just be a t-shirt section. The costumes in this section are cheaper and the best thing about this section is that you can move around and have more freedom during the parade than the Front Line.

What are Hot Shorts?

Hot shorts are a costume option for men. They are just a boy shorts for the bottom of costumes. Women will typically have a bikini bottom.

Calypso is a popular type Afro-Caribbean music. It often has a strong message, moral tale or is some form of political or social commentary. It is set to catchy beats. It is a good way to stay informed about what is happening on an island.

Soca actually derives from the worlds Soul and Calypso. Soca is music that was made to be danced to. It has up tempo beats and is infused with a little bit of soul.

This is a type of music that is popular in the southern Caribbean islands. It is like a fusion between soca and Indian music. Even the lyrics can have broken up English and Hindi music.

What does it mean to Jump or Jump Up?

This means exactly what is says, get up and dance. When you jump in the parade you are dancing the day away with your fellow masquerades in the parade.

This is a name for some sexy dance moves that see you essentially moving the hips and waist.

The Grand Masquerade Ball of Casanova is one of the most sophisticated private parties in the world, it takes place in a Venice palace, find out.

Spain is home to some of the best carnivals in the world! Find out some amazing places in Spain to celebrate carnival 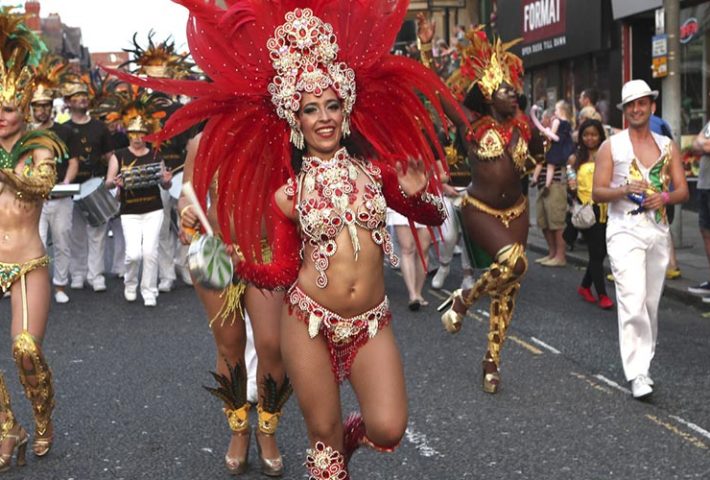