Bridgwater Guy Fawkes Carnival 2021 is one of the most unique carnival in Europe, here is why.

When is the carnival?

Bridgwater Carnival 2021 has been canceled due to the Pandemic, we will wait for you in 2022.

Where is the carnival?

The carnival takes place in Bridgwater, which is located in the South West of England.

Book your Hotel and Flight for the Bridgwater Carnival

History of the carnival

The origins of the Bridgwater Carnival can be traced back to the Gunpowder Plot of 1605 when Guy Fawkes and his fellow conspirators, failed in their attempt to blow up the Houses of Parliament in London. That story is well known to everyone, but what is not so widely acknowledged is that it was King James 1st and his parliament who decreed that the events of 5 November should be commemorated annually with the lighting of bonfires, a tradition which is celebrated across the nation to this very day.

Maybe it was because Bridgwater was staunchly protestant in those days that the townsfolk celebrated with greater vigour than anywhere else, creating a tradition of widespread merrymaking on the annual anniversary of the fifth . Or maybe it was just an excuse to enjoy an evening of fun around the bonfire before the long, cold nights of winter really set in.

Whatever the reason, those celebrations have now grown into the magnificent spectacle which takes to the streets of Bridgwater each year in early November.

From journalistic records the development of the carnival can be traced from 1847, making Bridgwater Guy Fawkes Carnival the oldest event of its kind in the United Kingdom, and it seems it was the Victorians who were instrumental in establishing the format of the carnival for future generations to enjoy.

Celebrations in those days concentrated around a huge bonfire which was built on the Cornhill, right in the centre of the town. From all corners of Bridgwater, townsfolk paraded to this bonfire, many disguising their identities in costumes and masks, a practice which enabled them to get up to all sorts of harmless mischief. Once assembled, effigies of Guy Fawkes, the Pope and others who had upset the local population, were added to the flames. From early evening, hundreds of home-made Bridgwater squibs (the unique fireworks which are still very much a part of the town’s carnival tradition) were ignited in the town centre and a night of merrymaking ensued until the early hours.

It was the celebrations of 1880 however which was to change the course of the carnival forever. The evening of the fifth that year began so well, but the usual good humour and excitement gave way to ill temper and acts of violence, leading ultimately to serious disorder and riot. By 1 o’clock in the morning the bonfire was still burning with plenty of fuel remaining to add to the embers. Most of the crowd had gone home but around 300 people were still celebrating around the fire.

The local authority considered enough was enough and called in the newly formed fire brigade to douse the flames and put an end to the festivities. Not a wise move as this angered the revellers, so much so that they cut the fire hoses and those which remained intact were turned on the firemen themselves. Fireman James Ware refused to give up the possession of a standpipe however and he was set upon by the angry mob who chased him through the streets of the town. Although sustaining a few cuts and bruises he managed to escape to the shelter of his home where he remained under the protection of the local police.

Next day, the riot was the talk of the town and various parties were blamed. It took a letter from Frank Squire, to the town’s newspaper, to focus peoples’ attention on the real issues. He suggested that a controlling committee be formed and an annual procession organised so that citizens in other parts of the town could witness the magnificent costumes which were, by now, a major feature in the festivities.

Frank’s suggestion received substantial support and the following year, 1881, the first carnival committee was formed and the first official Bridgwater Guy Fawkes Carnival paraded through the streets of the town. From this inaugural event has grown the country’s longest running carnival, justifying the town’s title as the ‘Home of Carnival’ within the UK. Nowadays over 100,000 spectators from all over the world visit the town every year to watch this mesmerising carnival.

How is it celebrated?

Approximately 50 carnival carts, some as big as 100ft long, 16.5ft high and 11ft wide and lit by thousands of lights, wind their way through the centre of this historic town, creating an explosive atmosphere of light, sound and movement. Accompanying these carts are groups and individual masqueraders on foot, marching bands and majorettes, bringing their own carnival flavour to the festivities.

The big parade starts at 6pm and takes over two hours to pass any one viewing point on the 2½ mile route, and the carnival is brought to a dramatic finale with an amazing squibbing firework display in the middle of the town.

During the carnival daytime and as the anticipation builds for the big procession, there is a whole host of top class entertainment in the town centre to enthrall those spectators who arrive early.

How can I find more information?

Carifiesta Montreal is an annual summer celebration in Montreal. It is all about embracing and celebrating Caribbean culture.

Jamaica Carnival is the place to go if you want to have the time of your life! It is a high energy, vibrant and colourful celebration. Filled with reggae, calypso and soca music. Here is everything you need to know about attending carnival in Jamaica. 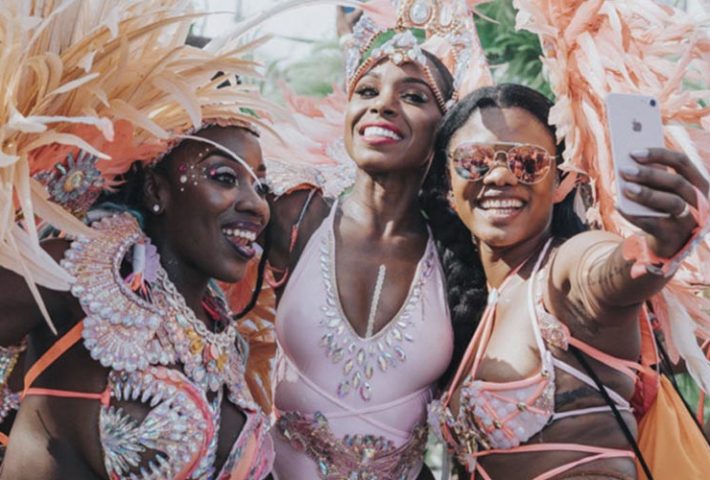 Junkanoo Carnival is held every Boxing Day & New Year’s Day. Junkanoo is the heart and soul of Bahamian culture & the most anticipated event of the year! Here is everything you nned to know about Junkanoo!

Lafayette Mardi Gras is the biggest and best party in the United States. It is full of parades, parties and centuries of tradition. Here is everything you need to know about celebrating Mardi Gras in Lafayette!