12 Things To Do and See at New Orleans Mardi Gras

Here are our 12 recommendations to spend an unforgettable Mardi Gras in New Orleans.
Table of Contents
Add a header to begin generating the table of contents

Be ready to party!

Mardi Gras is hard! It is nothing but non stop celebrating and you may be exhausted by the time the biggest party day – Fat Tuesday arrives. There is so many parties in the lead up to Mardi Gras Day.

Then on the big day there is the best party atmosphere in the French Quarter, Marigny and so many other New Orleans neighborhoods. Huge crowds of people area all out in costumes, while DJs and bands sit on street corners. Everyone is happy and celebratory so get in the carnival spirit!

If you are wandering down Canal Street or Bourbon Street with a huge collection of beads around your neck, a giant cocktail in your hand then you are in the party spirit.

What is Kings Cake?

It is a Mardi Gras tradition  and a tasty one at that. The King cake is a cake made out of Danish dough, covered with sugar toppings in the Mardi Gras colours of green, gold and purple and it is an oval shape. What is unique about this tradition is that a small plastic baby is hidden inside of the cake, and the person who gets the baby has to throw the following year’s King Cake Party. Thousands of Kings Cakes are consumed throughout the county every year.

You must dress up! Dressing up is an essential part of Mardi Gras. In fact if you don’t dress up then you will be the odd one out. Some local New Orleanians will spend the better part of the carnival season planning their costumes with some even spending thousands of dollars on elaborate costumes.  You don’t have to go to overboard just grab something colorful, sparkly, weird or even fancy.

Wearing masks during Mardi Gras is a traditions that has been done during carnival for centuries. It is a way to escape the constraints of your social class and society. Many balls and masquerades are required to wear masks during the parades, there is even a law demanding it.

The balconies in New Orleans during Mardi Gras are almost an entirely separate event. There is nothing like viewing the Mardi Gras celebrations with a birds eye view. You will feel like royalty, celebrating above the crowds below.

Some popular and affordable balconies include The Bourbon Vieux which has the largest balcony in New Orleans and cost $100 for daytime and $140 for night time. You can also try the St. Christopher Hotel or the Avenue Pub. If you have deep pockets, you could rent a balcony room in Vieux Carre on Fat Tuesday, or alternatively make friends with someone who does have deep pockets.

There are some epic gallant antebellum mansions around the celebrations, and many of them throw the most awesome extravagant parties you’ve ever seen with smorgasbord buffets, extensive open bar sections and many are open to all, so long as you don’t make yourself unwelcome. Not every party is open, but if there is an open gate and an open door then it doesn’t hurt to poke your head inside.

While it’s one thing to watch Mardi Gras from the sidelines as a spectator, it is a whole other experience to be part of the parade. There are several krewes that will allow you to join and walk or ride in the parade. Being a rider is the ultimate New Orleans experience for you to tick of your bucket list.

Watch the Rex Krewe- The King of Mardi Gras

The Krewe of Rex is the oldest, and still plays a major role in Mardi Gras celebrations to this day. The Rex Parade is an annual attraction of New Orleans Mardi Gras and is considered a centrepiece of the Mardi Gras because of the Krewe’s rich and colorful themes, their original costumes and elaborately hand-decorated and hand-painted floats.

Mardi Gras Indians are another unique New Orleans Mardi Gras tradition that needs to be witnessed. These New Orleans Tribes were formed by the African American communities in who were excluded from the early celebrations and used to have their own celebrations mocking the krewe royalty.

Another Krewe that is considered carnival royalty is the Zulu Krewe. The Zulu Krewe were created in 1916 and was the first Krewe dedicated solely to the African American population of New Orleans. They also put on an epic parade and have the most prized throws at Mardi Gras!

Catch Prizes at the Parades!

New Orleans Mardi Gras hosts multiple parades every few days during the carnival season. “Throws”, trinkets, beads, and other items are thrown from floats to the crowds. This tradition has been occurring since 1870. The beads, cups, and doubloons are the most sought after by all parade attendees.

Some of the most coveted prized throws include a Muses shoe, which is thrown by the all-women krewe of Muses. Painstakingly hand-decorated high heels, wedges, flats, boots and mules are given out and are one of the most coveted souvenirs! You can even get a glitzy purse from the Krewe of Nyx to go with your shoes.

The most coveted prize is the Zulu coconut which is said to be the golden nugget. These throws are literally festively decorated coconuts. A delicious catch is a MoonPie which are chocolate disks of marshmallow goodness.

Many of the Mardi Gras Balls are private invitation only events, where only krewe members can attend. However there are a few krewes that host some extravagant balls that are open to the public. The krewes of Oprheus, Endymion and Bacchus have balls that are highly recommended to the public.

Here is your ultimate guide to the New Orleans Mardi Gras! 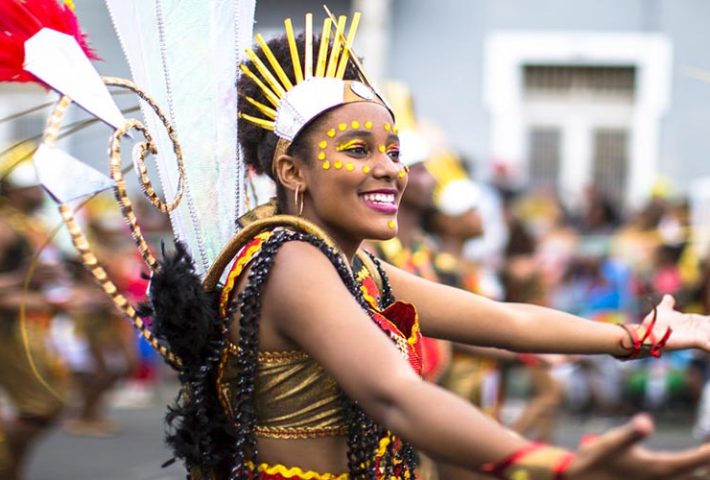 7 Places in Asia to celebrate Carnival!

Everything you need to know about Venetian Masks!

In this article you will find everything you could possibly want to know about Venice’s Masks. Masks play an important role in the cultural heritage and history of the city. This article lets you get more informed before your travels.

Your Comprehensive Travel Guide to Venice

Here is a handy guide to help you navigate Venice and discover one of the world’s most incredible cities. From the top sights, how to get around, where to stay and more, we help you get the most out of your trip.